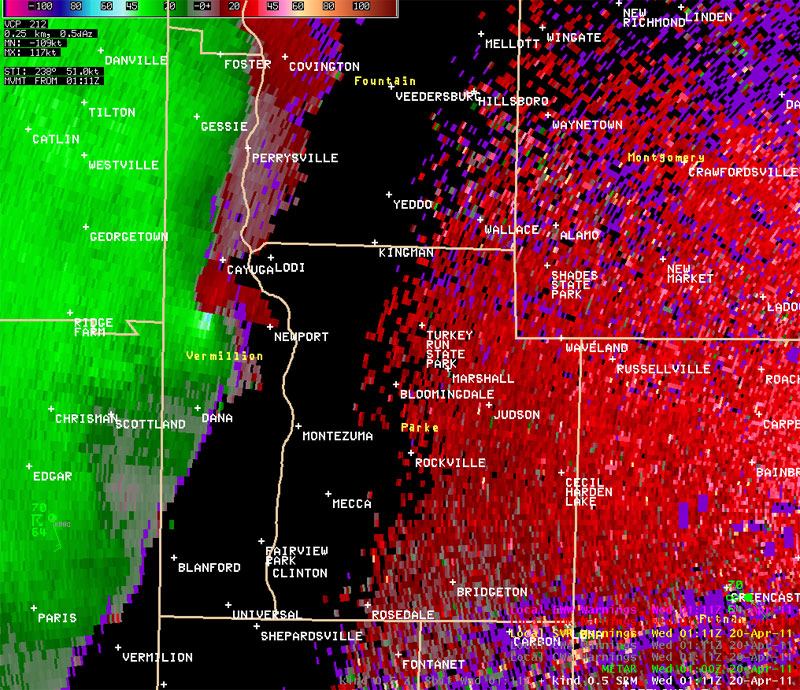 Eleven years ago to yesterday was volatile day in Indiana when severe storms impacted portions of the state. These came within two rounds: One being early in the day with another rolling through during the evening hours.

First Round of Severe Storms
The first round of storms that moved through earlier in the day brought heavy rainfall and pockets of hail to the area. Rainfall amounts as much as over 2 inches fell in some places especially around Indianapolis where nearly 2 1/2 inches of rain was reported to have fallen in the area.

By late evening on April 19th, the storms would make their way into western Indiana as one of the bowing segments raced into the state. As the storms crossed into Indiana, they would spawn a few tornadoes with one tornado forming south of Lafayette, another in Vermillion county, and one near Thorntown, Indiana. Two of these would be rated EF-2 with the third one being rated an EF-1. Tornadoes wasn’t the only thing this system would bring but it would bring the threat for damaging winds especially with the quick moving bow echo segments along the squall line. This would to a lot of reports of vehicles being blown of the interstate like on the northwest side of Indianapolis, tree limbs being brought down, and even some damaged property such as in Fort Wayne when a shopping center and a machinery received damage from straight line winds that blew through the area. Afterwards, there were reports of power lines being down meaning that people didn’t have power.