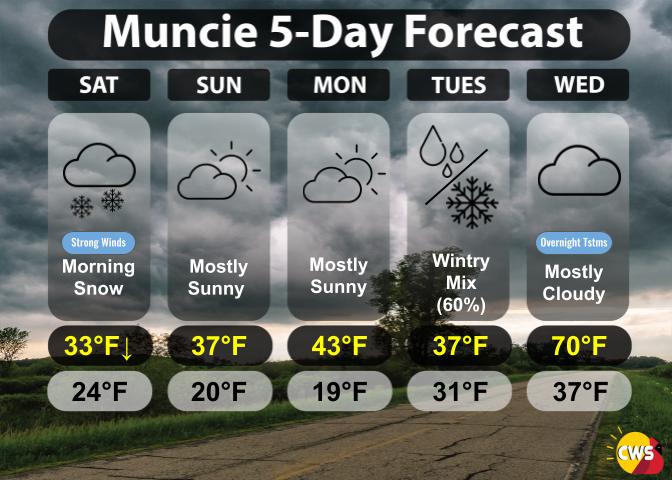 An active weather pattern will bring serval chances of measurable precipitation during the next 5 days. The chances of snowfall is looking more likely for Saturday and Tuesday morning. Temperatures will stay well below average for the weekend and the first half of the work week. A strong Pacific system is expected to move over the region by next Wednesday bringing a massive warmup and the potential for some thunderstorms by the tail end of next week.

Saturday: A clipper system will be moving in and out of the area in the morning creating chances for snow in the pre-dawn and morning hours. Saturday is just going to be a down right miserable day we’ll hit our high on Saturday of 33°F likely around or before sunrise, temperatures will be falling to the mid to upper 20’s in the afternoon and evening with a nippy northwest wind around 15 mph with gusts as high as 35 mph on Saturday. It wouldn’t surprise me if we see wind chill values stay in the teens for much of the day tomorrow. The day will be cloudy and snow that will be falling should diminish by noon.

Sunday: Polar ridge will dominate the weather, the winds will still be out of the northwest at around 15 mph, the day will be partly to mostly sunny, highs only in the upper 30’s. Some of the colder pockets could see wind chill values Sunday morning in the single digits at times. Lows around 20°F.

Monday: Ridge still in control of our weather, winds will subside a bit on Monday. Still unseasonably cold for this time of year. Partly to mostly sunny, we’ll start off the day around 20°F for the city of Muncie, points south and in the upper teens for the rural parts and north of Muncie and yet again it could be another morning where we could see some morning wind chills dip into the single digits at times om Monday morning.

Tuesday: Weather models now in a little bit of disagreement of what might happen early Tuesday morning. Yesterday both of the major weather models, the GFS and European models were agreeing that we would see a wintery mix on Tuesday morning. Now the GFS is siding with snow in the morning transitioning into rain, and the European model showing the system moving in late in the day Tuesday instead of the morning as rain. So confidence for our forecast Tuesday is not as strong as yesterday but still something to keep an eye on. In the grand scheme of things, precipitation is likely on Tuesday. The day will be cloudy highs only in the mid to upper 30’s, lows right around the freezing mark.

Wednesday: A robust system is forecasted to move into the region from Southern California to the Great Lakes region an associated warm front is expected to lift it’s way in giving us an outside chance of rain in the morning, the day will be mostly cloudy to cloudy. Highs around 70°F! Welcome to Indiana to all you out of state students out there! Snow and 70°F weather all in the same week. Morning lows will be in the upper 30’s as the low pressure system will draw in warm air from the Gulf of Mexico, and Wednesday could be a windy day. The weather models are hinting that in the overnight hours there could be a chance of overnight thunderstorms Wednesday into Thursday, but that will be a discussion for a Thursday forecast as the chance of thunderstorms on Wednesday is currently slim to none.