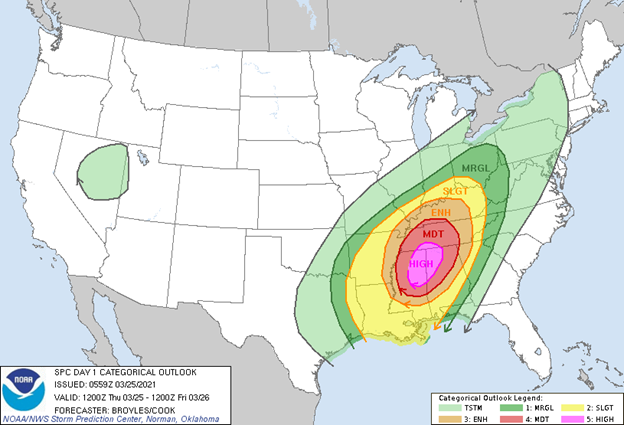 Recently, on Thursday, March 25th, 2021, a damaging tornado outbreak took place in the Deep South, unfortunately killing 5 people. This event also effected places further north into Kentucky and southern Indiana as well. The day started as the Storm Prediction Center issued a High Risk for severe weather in the southern US, specifically for the risk of tornados. A High Risk is an unusual forecast risk category that is saved for only the worst scenarios. The highest risk was located in extreme southern Tennessee, Northwest Alabama, and Northeast Mississippi. Additionally, a slight risk stretched from the Gulf of Mexico all the way up into southern Indiana.

By 11:00 a.m, the governor of Alabama had already issued a State of Emergency for her state. The first tornado report came shortly thereafter at about 1:00 in the afternoon. One specific cluster of storms made their way from the Western Alabama state border and travelled all the way across the state into Georgia, near Atlanta. These storms were powerful and the most significant of the outbreak. One specific storm in this cluster produced a tornado that lasted about 80 miles before dying out! This tornado was later found to be an EF-3 producing an estimated wind speed of 150 miles per hour, according to the National Weather Service! There was another tornado that also lasted for about 50 miles. The most intense tornado was an EF-4 that travelled through Western Georgia and produced winds estimated at 170 miles per hour. This tornado lasted for 39 miles. According to National Public Radio (NPR), Alabama and Georgia would report 26 thousand and 19 thousand power outages, respectively, by Thursday night. Aside from the cluster that ravaged though Alabama and Georgia, there were also storm reports that stretched all the way up into southern Indiana. Most of these were severe wind and hail reports, however, there were some smaller tornados as well. Most of the reports outside of Alabama and Georgia were less severe and more isolated. There would end up being 47 tornado reports by the end of the day. Here is a map showing the storm reports:

While this severe outbreak was very significant, it could have been much worse. Luckily, no EF-5 tornados developed, something that could be entirely possible when under High Risk. In fact, many of the tornado reports were not even located in the region where the worst weather was expected. Even though the outbreak was serious and there were casualties, the way the storms played out was perhaps one of the better possible scenarios compared to others!