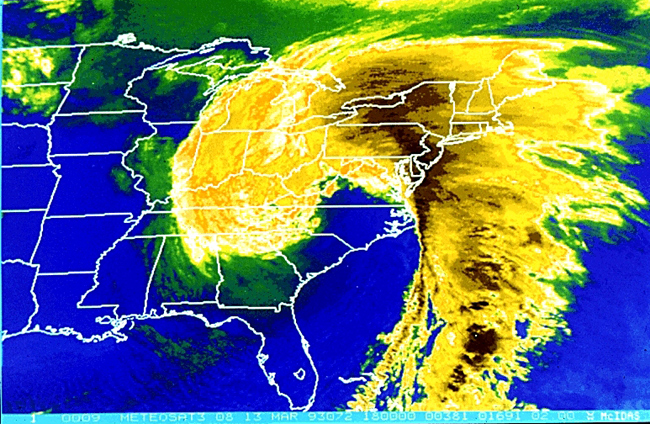 On March 12th, 1993, this day 26 years ago, it is safe to say that a storm was brewing. The storm of the century in fact. Also known as the 93 Superstorm or the Great Blizzard of 93, this storm was definitely named appropriately.

It formed on March 12th, 1993 as a low pressure system over the Gulf of Mexico. From there it became a very strong mid-latitude cyclone over the southeast portion of the country. It had a very low central pressure of 991 MB on the evening of the 12th, and it only went lower from there. Minimum central pressure was all the way down to 960 MB, even lower than many hurricane pressure centers. The impacts from the storm over the coming days would be felt across 26 states on the Eastern half of the U.S. and even all the way up into Canada. Overall, this storm was ranked as a Category 5 “Extreme” extra-tropical cyclone.

SNOW: Impacts of this storm were all sorts of types. From heavy snowfall to even tornadoes in Florida, the ’93 Superstorm had it all. Snow amounts across the Eastern to Northeastern U.S. were anywhere from a few inches to a few feet in some locations. Locations as far South as Birmingham, Alabama received as much as 13 inches of snow. Strong winds and gusts in addition to the heavy snowfall made blizzard conditions widespread, and even caused snow drifts in excess of 10 feet on some locations. Temperatures also dropped sharply with this storm, with temperatures reaching below 10 degrees for a full 24 hours in North Carolina.

GULF: Impacts along the Gulf of Mexico included strong winds and rough waters that sank many ships, large and small. The Coast Guard rescued a total of over 200 people from the waters during the storm. Substantial storm surge was also produced along the coast of Florida. Some areas along the coast had surges of up to 10 or more feet.

TORNADOES: While all of this was going on to the North, there was a tornado outbreak in Florida. A line of severe thunderstorms formed along the cold front for this storm, which produced a total of 11 confirmed tornadoes. Straight-line winds of around 100 mph were measured in some locations, with lots of damage from strong winds and tornadoes. The strongest of the tornadoes were an F2 on the Fujita scale.

All in all, this storm caused over $2 billion in damage across the country, and resulted in the deaths of over 300 people. It is one of the meteorological giants in regards to storms that can be studied, and there is definitely a lot to be learned from it.