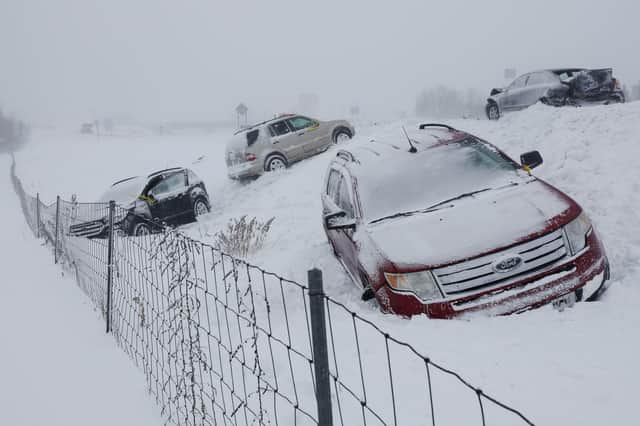 What is a Midlatitude Cyclone?

A midlatitude cyclone is a low-pressure system that is found between the tropics and polar regions. These cyclones can be around 1200 mi (2000 km) in diameter.

An example of a midlatitude cyclone that turned into a bomb cyclone is winter storm Elliott. This storm brought lots of snow and damaging winds to the east coast. This storm occurred on December 21 and 22, 2022. The highest amount of snowfall from this storm was 39 inches in Synder, New York. In Mount Washington, New Hampshire, a bazaar wind speed of 151 mph was recorded. This would be equivalent to a high EF-3 tornado wind speed. In addition, some areas had zero visibility.

On the other side of the country, places like California received flood watches and warnings instead of winter weather watches and warnings. California saw some damaging winds topping 60 mph in some areas. This led to copious amounts of rainfall, which led to areas of coastal flooding. One example was in San Francisco, where they received around a foot of rain.

The State of California saw some extensive damage from this storm. There were trees knocked over, widespread power outages, mudslides, and flooded roadways.

This event is one to remember. This teaches that we could see another storm like this in the future. Be sure to know your winter weather disaster plans and keep in touch with all weather reports.