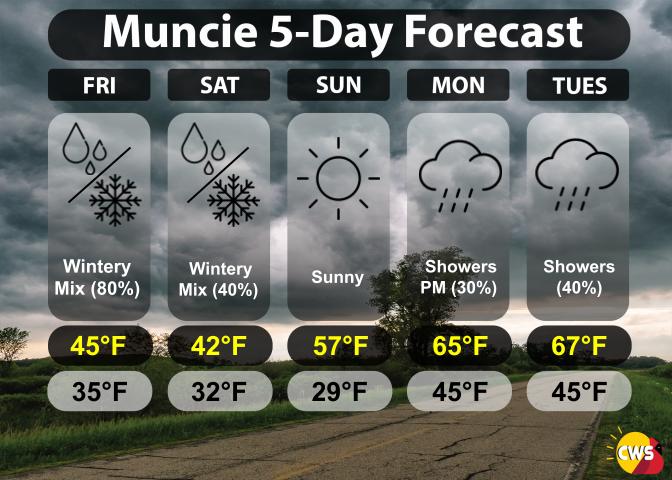 Friday: A strong polar low is expected to move north of the region on the day on Friday. On the backside of the system some rain/snow mix is expected on Friday. Temperatures on the day on Friday should be warm enough for it to be rain during the day as we will be in the low to mid 40’s. However, in the evening temperatures should be cool enough aloft to produce some snow that could mix in and could reach the surface. Measurable snowfall is highly unlikely at this time. Lows will drop to the low to mid 30’s.

Saturday: The upper low will continue to depart. The day will be cooler than Friday and we could see our best chance of snow in the morning into the afternoon on Saturday. The high will be in the low 40’s, low 32.

Sunday: Should be a beautiful day, nice bright and sunny, a chilly morning but a nice warmup. Lows in the upper 20’s, highs in the upper 50’s.

Monday: Another polar low located over southern Canada will bring a front down to the Muncie area. This could produce some rain showers for the day, a rumble of thunder or two cannot be ruled out at this time. The high in the mid 60’s lows in the mid 40’s.

Tuesday: The day Tuesday will be partly sunny, however there is a chance for clouds to increase as the day goes on and for some isolated showers to move in the later hours of the day Tuesday. It will be a nice warm day, highs in the upper 60’s, morning low in the mid 40’s.