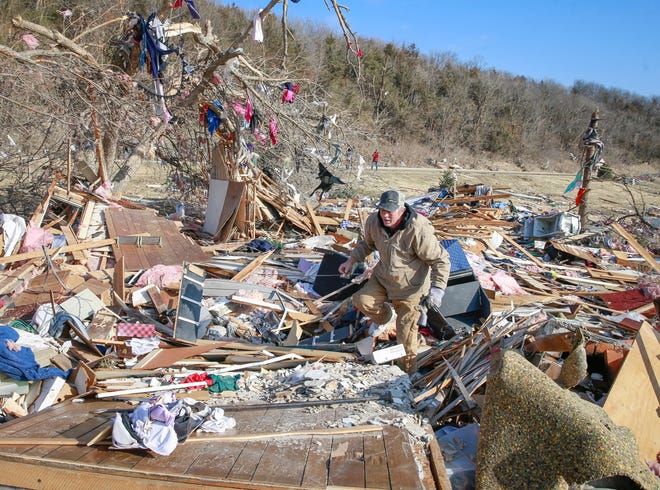 10 days have passed since the system blew through central and southern Iowa, dropping tornadoes and severe weather. How did this system manage to drop these tornadoes only 5 days into the meteorological Spring?

For severe weather to occur, conditions in the atmosphere need to be favorable for these storms. On March 5th, the Storm Prediction Center issued an enhanced risk for southern Iowa, and a slight risk for almost all of the remaining parts of Iowa. With in the enhanced risk, there was a 10% chance for tornadoes within 25 miles of any given point in the area. (see image below), and a 5% chance for most of Iowa. Strong tornadoes were not forecasted, but they can occur at any time with a tornadic thunderstorm.

Strong low level wind shear, which is the change of wind direction with height, was very strong, which aided the formation of mesocyclones and tornadoes. The atmosphere also had plenty of energy, with values from 2,000-1,000 J/kg . This is important because this energy helps to give storms their punch and remain strong, creates instability (good for thunderstorms), and strengthens lift. Once the storms formed, they flourished under the atmosphere, causing large hail, damaging winds, and tornadoes across the area. What no one expected was an EF-4 tornado to claim 6 lives in its path. This system spawned 6 tornadoes that were rated as EF-2 or higher. Here is a summary of these tornadoes. According to the Storm Prediction Center, there were 43 tornado reports, 138 wind reports, and 29 hail reports.

This tornado spawned a tornado south of Tama, Iowa. It tracked for 8.6 miles, and was actually a later tornado spawned by the Winterset storm that spawned the EF-4. The Tama tornado was on the ground for an estimated 9 minutes. Luckily, no one was injured or killed by this tornado.

The Allerton/Corydon tornado was on the ground for about 10 minutes, and carved out a path about 7.5 miles long. Luckily, it was just east of these two communities, and no injuries or fatalities were reported. It did cause enough damage on the far outskirts of these places to earn the EF-2 rating. It peaked the winds at almost 120 mph. This tornado dissipated northeast of Corydon, Iowa.

This tornado carved out a path almost reaching 18 miles. It was rated as an EF-2, and was on the ground for 24 minutes, while carving out that 17.9 mile path. No injuries or fatalities with this as well. The wind were peaked at about 122 mph. The tornado then dissipated south of Derby, Iowa.

This significant tornado formed east of Derby, Iowa, and tracked northeast, with max winds at about 138 mph. This tornado was on the ground for 16.5 miles, and lasted for about 24 minutes. In its path, it caused extensive damage, injuring 1, and claiming a life.

This tornado was the second longest tracking tornado in Iowa since 1980 according to the National Weather Service. The tornado formed southeast of Winterset and rapidly intensified, carving out a damage path for 69.5 miles. This tornado was on the ground for 1 hour and 35 minutes. The destruction it caused was immense as it impacted the community of Winterset, Iowa, tracked south of Des Moines, Iowa, and continued to cause extensive damage throughout its long path before dissipating. Unfortunately, this tornado caused 5 injuries, and laid claim to 6 lives.

People were expecting tornadoes, damaging winds, and large hail. But was it expected for an EF-4 tornado to plow through Iowa? Probably not. That is why people should always remain vigilant when under a tornado warning. Any tornado can be significant, or deadly, so take each warning seriously.