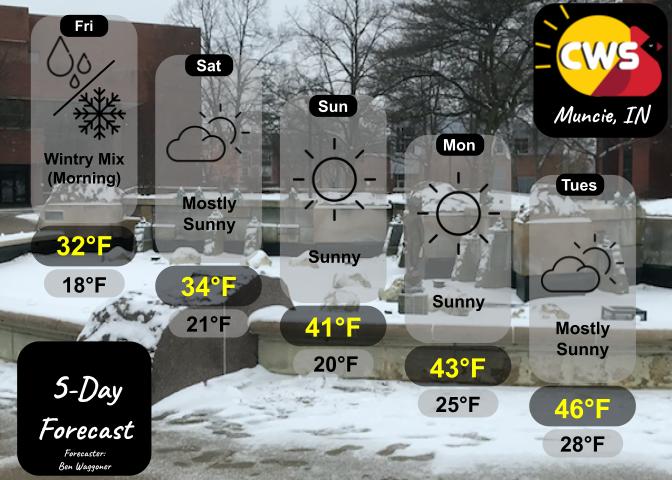 Active weather pattern expected to end early tomorrow, a quiet and dry weekend is expected with temperatures slightly below average. Quiet weather will continue for the first half of next week with temperatures returning to normal as the wave pattern is going to position north of the area.

Friday: Our winter storm will be moving out of the region, some light freezing rain or snow will be possible early tomorrow morning but should be gone before the morning commute. Regardless, untreated road will be difficult to drive on due to the snow and ice expected to accumulate. The high will be in the low 30’s, nighttime lows in the upper teens.

Saturday: A strong polar high will be situated over the Ozarks region, this will make the day Saturday dry with mostly sunny skies and chilly. Highs will be in the mid 30’s, lows around 20. Saturday morning however, we could see Windchill values in the single digits locally at times.

Sunday: A ridge will still dominate much of the weather across much of the region, the day on Sunday should be bright and sunny. Highs around 40, lows in the lower 20’s.

Monday: Ridge of high pressure still dominates much of the eastern half of the country, it will be another dry and sunny day. Temperatures right where we should be for this time of year. Highs in the mid 40’s, lows in the mid 20’s.

Tuesday: A weak system moving over Michigan is a possibility, however precipitation here in Muncie is not expected, some clouds are expected to move in, the day will be partly to mostly sunny, highs in the mid to upper 40’s, lows in the upper 20’s.