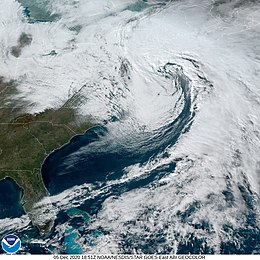 There are a lot of interesting weather phenomenon that we often hear about such as a tornadoes, hurricanes, ice storms, and much more! But what about bomb cyclones?

Bomb cyclones are known as when a cyclone, usually in the mid-latitudes begins to intensify rapidly or when there is a quick drop in pressure. This process is also known as bombogenesis.

When does this occur?
This can occur at during the winter when the jet stream stronger over North America.

How do they form?
They usually form when the jet stream is positioned in a way in which cold air is being pulled downwards with interaction from moist air from the Atlantic Ocean. Winter storms are prone to ride out the jet stream and once the storm begins to move up the coast, the pressure begins rapidly with the storm. For a storm to be considered a bomb cyclone the pressure would need to drop 24 millibars within 24 hours. Some storms have been known to drop 60 millibars with 60 hours.

How does a bomb cyclone impact the United States?
Bomb cyclones are known to bring heavy rain, heavy snowfall, and strong winds to the eastern United States especially New England.

Notable Cyclones
There have been plenty of notable bomb cyclones over the last one hundred years
–Superstorm of 1993: The pressure dropped 33 millibars within 24 hours! This storm led to heavy snow impacting much of the eastern U.S with heavy snow being reported to as far south as Georgia. Severe thunderstorms were also reported in Florida and in the Caribbean.
–Blizzard of 2015: More than 2 feet of snow was reported in New England.
–Storm Dennis 2020: Brought flooding to much of the UK.