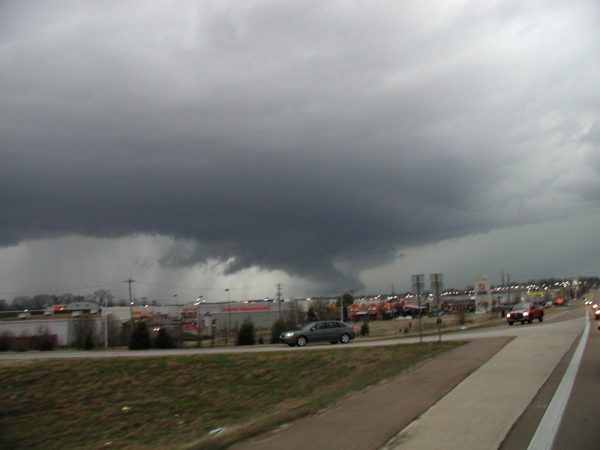 February is typically a month full of volatile weather events such as snowstorms, blizzards, severe weather events, and much more! February 2008 was one that many look back to remember due to the events that unfolded that month. On Tuesday, February 5, 2008, may headed to the polls to vote on what was known as Super Tuesday. Unfortunately, that day would prove to become an infamous day in the years to come.

Origin and Initiation
As early as February 3, a trough began to emerge of the Rockies and a surface high would move towards New England. This would end up resulting in circulation with these two features which would lead to a extended period of southernly flow that could come out of the Gulf of Mexico ahead of a cold front. By mid-day on February 5, the ingredients are all in place for the outbreak: unstable air mass, surface dew points near 65 degrees as far north as southern Tennessee, and a good supply of low-level moisture that would support storm development.

Dynamics
Early on February 5 , the cold front began to advance eastwards past the Rockies and by mid-day was approaching the warned area for severe weather for the day which was concentrated from Oklahoma and pointing towards the Ohio Valley and especially the Deep South. A squall line would began to come to life in east Texas along the front. Early on in the day, there had been a moderate risk of severe weather in place for much of the Tennessee and Ohio Valley but this would grow into a high risk that would pinpoint the Mississippi Valley for the potential to see the worst of the severe weather later that day. The potential for tornadoes in this are was noted to be at 30% chance with also the chance for significant tornadoes in that area and in the areas surrounding it. By mid-afternoon, all hell would break loose with the severe weather.

Tornado Outbreak Unfolds
The outbreak began at around 3:30pm CST (4:30pm EST) when the first tornadoes of the day began to touch down in Arkansas. This would continue on for the next several hours and began to spread to other states by the evening hours. The tornadoes would go on to impact 10 states by the morning of Wednesday, February 6th. Within a span of 24 hours, 86 tornadoes would touch down, 5 of those tornadoes would go on to be classified as EF4 tornadoes. Some of these EF4 tornadoes impact areas such as Jackson, Tennessee. Another EF4 tornado, also known as the tornado that claimed 13 lives paved a 122-mile track through north-central Arkansas.

Aftermath of Super Tuesday Outbreak
Up to 57 lives were taken as a result of the tornado outbreak The tornadoes caused $1.2 billion dollars in damage. The outbreak was known as the most prolific since the May 31, 1985 outbreak in parts of New England.

How did this system impact other states?
The same time as the outbreak on February 5 was impacts much of the Mississippi Valley and Deep South, states in Northern U.S. experienced a different challenge and that was the heavy snowfall that impacted the area. On the backside of the storm, heavy snow impacted portions of the upper Great Plains and Great Lakes. This would lead to traffic pile ups on the roads due to the blinding snow. Snow drifts and thundersnow was also reported during the height of the storm. The highest snow totals were recorded in Southern Wisconsin where nearly 2 feet of snow fell in the area.

What about Indiana?
Indiana ended up on being on the warm side of the storm system and ended up seeing rounds of heavy rain and thunderstorms throughout the day on February 5. Severe storms did impact the area late on February 5 as the same squall line that had plowed its way through much of the country also made its way through Indiana late in the evening bringing severe weather. A tornado was reported to have touched down in Putnam County which also traveled into Hendricks County before dissipating, just west of Indianapolis!!