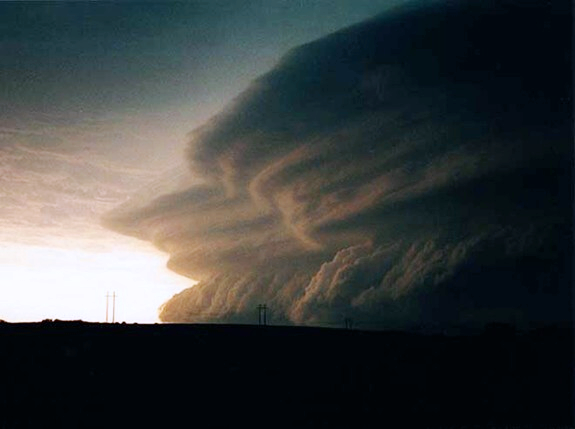 One less common severe weather phenomena is the derecho. A derecho is rare compared to traditional thunderstorms. Nevertheless, they do occur occasionally, and they can be very impactful when they develop. Just in 2020, a derecho travelled 720 miles from South Dakota to Ohio, causing major damage as it went.

So what is a derecho? A derecho is a thunderstorm complex that forms a bowing line, producing extreme winds that can sometimes exceed 100 miles per hour! These storms are long lived and long tracked, sometimes travelling for 1,000 miles or more! Derechos are specifically known for producing straight-line winds. Hail and tornados are not distinguishing parts of derechos. Derechos appear to look like squall lines on radar. Here is a map showing the radar at various times during a derecho that affected the area in 2012:

You can see that this derecho began as a cluster of thunderstorms in Iowa, and quickly organized and expanded as it moved through Indiana, Ohio, West Virginia, and eventually to the Eastern Seaboard. This was a very long-lived derecho.

Derechos are not a common phenomenon, but they do happen about once a year in this area. Derechos are most common in a swath from Ohio down into Texas. They can occur just about anywhere in the Great Plains, Midwest, or Eastern United States. They also mainly form during the months of May, June, and July.

Derechos can be very costly as they produce extreme winds that are widespread over large regions. There is often little notice before a derecho forms because they are hard to predict. Derechos can cause power outages, building damage, agriculture loss, and other affects of powerful winds. According to the Washington Post, the derecho from 2020 caused $7.5 billion on its 720 mile path. This costly damage competes with hurricanes! This specific derecho produced a peak measured wind gust of 126 miles per hour!

Hopefully, as science improves, so will the forecasting of derechos so they become less impactful as a result of advanced notice. In the meantime, it’s important to be on the lookout during the summer in case a derecho develops unexpectedly.

What Is A Derecho? (forbes.com)

Iowa derecho in August was most costly U.S. thunderstorm disaster – The Washington Post