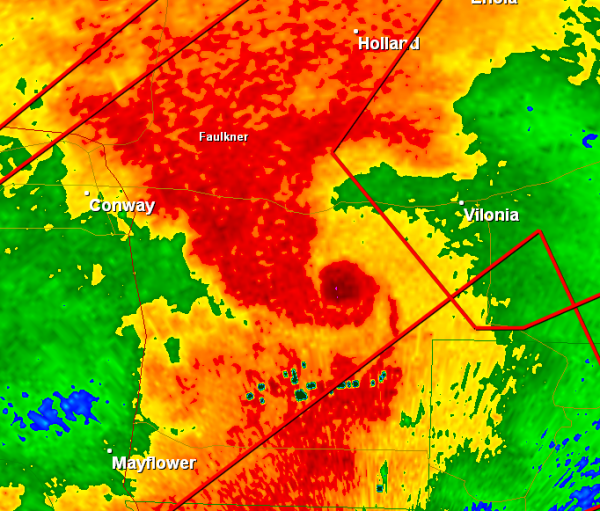 With the recent tornado outbreak in the deep south having just passed, you may be wondering how meteorologists detect tornados. Very rarely do tornados go undetected anymore as radar technology has become very advanced and can detect rotation within a thunderstorm even before a tornado forms. Here is a look into the telltale signs of a tornado using radar.

One of the most clear signs of a tornado is the hook echo, which simply describes the shape of the storm. A hook echo is where the shape of the storm looks like a hook on radar. When a storm takes this shape, it’s set up very favorably for a tornado to form, and possibly one that could become powerful. Another clear sign is called the debris ball, which is literally flying debris that the tornado picks up being registered on radar. A debris ball almost guarantees that a tornado is present and strong enough to pick up objects from the ground. Both the hook echo and the debris ball are present in the image below. The debris ball is the magenta color in the bottom left of the image, and the hook is the spiral shape centered at the debris ball.

Debris balls and hook echoes are clear signs of tornados, but most tornados don’t have clear signs. Many of them could never be detected by looking a standard radar image. Because radar technology has become advanced, there is a radar function that can measure velocity. This function measures the speed of the air within a storm, and then indicates if it’s moving toward, or away from the radar. It’s called doppler radar. This works because of a physics phenomenon called the doppler effect. The doppler effect is where objects with different motions reflect waves differently than others. This is something we notice all the time in real life. Think of a car driving by while holding on the horn, the pitch of the horn will sound different when it approaches you compared to when it passes you by. The same concept is applied to the doppler radar, which allows meteorologists to measure movements within a thunderstorm. So how does this help with tornados? Remember that a tornado has powerful winds moving in a spiral, so there are powerful winds moving to the left on one side of the tornado, and to the right on the other side. So on the doppler radar image, you simply find where the winds are moving in opposite directions very close to each other. Here is an example:

In this example the circulation was very easy to spot. In most cases, the circulation is more discrete, making it a bit harder to find, but it’s still much more effective than going by the general shape of the storm. Of course, the radar is never a definite indicator of a tornado, radar is simply a tool that can help meteorologists find places where tornados are possible. A tornado is never confirmed unless someone sees it, or damage is reported.