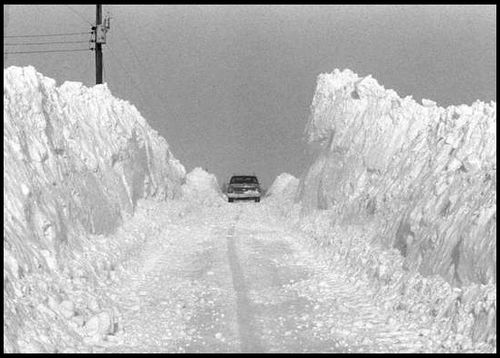 The near-zero temperatures and snow we’ve been getting recently is nothing compared to cold and snow that came through in early 1978!  Toward the end of January in 1978, a rare and significant blizzard crippled the entire region, leaving behind ample snow and cold temperatures.

The storm began as rain with temperatures just above freezing with a rapid drop on temperatures that very quickly brought extreme snow and wind as the very deep low passed through. According to the National Weather Service, the barometric pressure dropped to just 28.28 inHg in Cleveland, Ohio as the low passed over the region. According to the National Weather Service in Indianapolis, this was the first time that a Blizzard Warning was issued for the entire state of Indiana!

This storm had major impacts on the Midwest. Travel was impossible, no matter what kind of car you had. Indianapolis was blanketed with 15.5 inches of snow. Powerful winds pushed drifts of snow upwards of 25 feet tall, burying cars, roads, and homes. The snow shut everything down, roads were impassible. Even the police stopped patrolling because their cars would get stuck.

In addition to the snow was the extreme cold. Temperatures were around zero, and with strong winds, the wind chill neared 50 degrees Fahrenheit below zero! Many were forced to bear the cold as many motorists were stuck in the snow. In addition, the cold froze over the Ohio River, a major transportation channel, causing boats to become stuck in the ice.

Cleaning up the mess was a huge challenge that normal snowplows could not handle. In Indianapolis, landfill equipment had to be used to clear the drifts. The president issued a federal disaster in both Indiana and Ohio. In addition, the National Guard was even called out to help wherever they could.