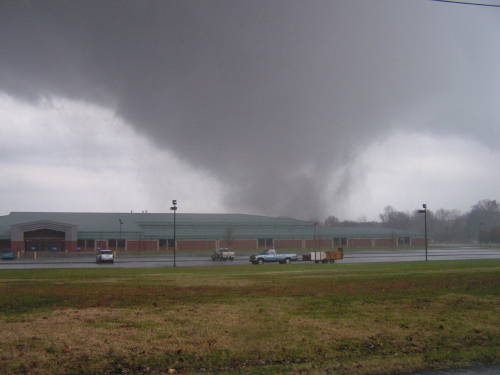 November can be volatile month for tornadoes especially with increasing fluctuations in the jet stream between Old Man winter and warm air fighting for control, especially in the Midwest. Over the years, there have been many significant November outbreaks. For example, just 7 years ago, Indiana experienced its own major tornado outbreak where 30 tornadoes touched down. In outside states, 40 more tornadoes touched down. However, today we look back at an outbreak that occurred in the Ohio Valley region just 15 years ago.

Before the Tornado Outbreak of November 15, 2005
Early on November 15, a few lines of strong storms begin to form in the Midwest. Throughout the later part of the morning and into the early part of the afternoon, the system began to move off to the east reaching the Ohio Valley region. Prior to the event, the National Weather Service began putting out severe weather outlook maps in the advance of this event. By November 14, it had become apparent that a severe weather outbreak could unfold on November 15. Forecasters were also noting that there was a favorable environment in place for tornadoes to form ahead of a strong cold front.

On the day of the outbreak, there was a high risk in place over parts of the Mississippi Valley and extending all the way to extreme southern Indiana, and southern Illinois. The tornado threat in the high risk area was up to 30% indicating a good chance for some destructive tornadoes to form. Throughout the later part of the morning, the outlook would continuously get upgraded and showed the high risk extending to cover much of Indiana and the surrounding states as well.

Initiation
Early on November 15, the SPC began to issue a Tornado Watch box for parts of the Mississippi Valley in advance of the severe weather. It was discussed from the SPC that there was very moist and unstable air in the region which was favorable for development of tornadoes that could form from supercell storms. Soon, the strong wind aloft would lead to more favorable conditions for severe storms and supercells with tornadoes to develop. Throughout the morning, a few lines of strong storms developed. By the afternoon, the second and the third line of supercell-like severe storms began to strengthen behind the initial line of supercell-like severe storms.

Events of the Mid-November Tornado Outbreak
At around 12:37pm on Tuesday, November 15, the first tornado touched down, four miles south of Matthews, Missouri. This was a weak EF0 tornado luckily, but the tornadoes to follow later that afternoon would be much stronger. A few more weak tornadoes touched down in parts of Missouri, Illinois, and Kentucky. However, at 1:45pm, further to the south, in Mayfield, KY, a tornado touched down and as it moved through Kentucky it significantly intensified in strength. By the time the tornado reached its peak, it was an EF3 tornado. The tornado continued until its dissipation in Saratoga, KY. The tornado killed 1 person and injured 10 more. The damage from this particular tornado was up to $8.5 million dollars.

During the duration of this tornado, the second line of supercell-like storms began to produce tornadoes as well. A supercell within the second line dropped another tornado in the same area as the first tornado outbreak had struck earlier. This tornado however was another weak tornado. After a few more tornadoes touched down, another significant tornado began to unfold. At around 3:27pm, another tornado touched down 1.5 miles southwest of Earlington, KY. This tornado strengthened into an EF4 tornado as it pulverized areas south of Earlington, KY.

Luckily with this tornado, no one was killed but there were 40 injured. The monster tornado racked up to $31 million dollars in damages. Later that afternoon, the storms would go on to strike Indiana and produce 4 more tornadoes in the state. Two of the tornadoes that touched down were rated EF3s while the other two were rated EF1s. The first EF3 tornado that touched down ended up injuring 31 people while the second EF3 tornado only led to one minor injury report.

Aftermath
The tornado outbreak of November 15, 2005, caused around $68 million dollars in damages. The outbreak lasted for just over 6 hours but was still very significant because of the amount of damages from the tornadoes that occurred in that time frame. There were 49 tornadoes that were confirmed to have touched down during the outbreak. The strongest tornado to have formed during this tornado outbreak was the one that formed southwest of Earlington, KY (also rated an EF4 tornado). Additionally, the storms that moved through the Mississippi Valley also produced excessive amounts of 3-11 inches of rainfall in areas.