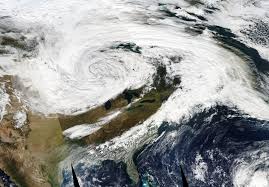 Just 10 years ago, around this time, the United States experienced one of the most prolific events that would go down in history forever. October 2010 was fairly normal until this system came into the picture just nearly a week before Halloween.

Initiation
An anomalously low was locked in place with an area of maximum winds that were in excess of 150 knots (175 mph) . This system came through the Pacific Northwest and began racing across the Great Basin, into the Mississippi Valley, and into the Upper Great Lakes creating a upper level divergence in the jet’s left exit region in the Upper Midwest. By then, a trough developed and began moving from the Rockies and Plains into northeastward into the Upper Midwest. The strong upper level divergence combined with the cyclonic vorticity advection and low level air advection led to the surface low to significantly strengthen as is crossed the Upper Midwest on October 26, 2010.

Events
Before the event took place, it was noted that severe weather was not supposed to be a possibility with the system. However, as the system began to significantly strengthen, severe weather started to become a possibility. There was an increase in low level flow from the night of Monday, October 25 into the morning of Tuesday, October 26. This led to moisture streaming into Middle Mississippi, Tennessee, and the Ohio Valley. These ingredients led to an increase in instability along with an increase in precipitation values. By the morning of October 26, the precipitation values were up to 1.9 inches from the previous night which had been 1.4 inches. The moisture increase and the large scale lift led to a line of thunderstorms to develop along a cold front by 1am on October 26th (06 UTC). The large amount of wind shear fueled the line of thunderstorms to remain severe and well organized for over 12 hours, as the system raced eastwards. As the system moved through the Ohio Valley, the system became notable for producing severe storms, damaging winds, rain, and even accumulating snow (mainly in the Upper Great Plains).

Impact on Indiana
Early on October 26, as the system approached Indiana, Tornado Watch boxes were set out in advance of the system that would go on to produce multiple tornadoes in parts of northern Indiana later that morning. Indiana ended up receiving high wind gusts as the line of thunderstorms (considered a squall line at the time) paved its way through the state. There were 13 tornadoes reported in northern Indiana as a result of the system. The tornadoes that did form were mainly EF0s and EF1s.

Aftermath
The complex that had impacted North America, moved offshore a couple days after pounding Upper Midwest and Ohio Valley. The storm was responsible for at least 18 million dollars in damages. The most prolific day of the event, October 26, saw 402 storm reports. Many of the reports on that day were confined to mainly wind reports. The storm led to tree damage, vehicles being blown off the roads, damage to buildings, knocked over towers, and lots of power outages in areas that were hit hard by the elements of the storm complex. The snow that fell in the Upper Great Lakes heavily impacted travel.