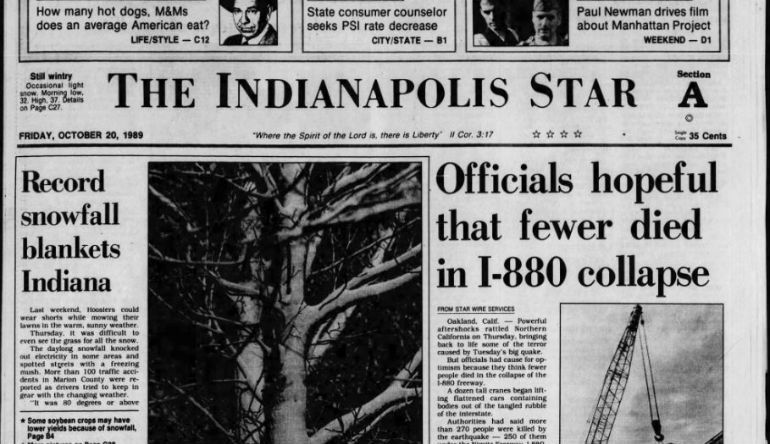 October 1989 was a pretty shocking time for those that lived in the Midwest, especially in Indiana. On October 18, some snow would begin to fall in Indiana and would continue all the way up through October 20 leading to this even being known as the October 1989 Snowstorm.

Initiation
By mid-October 1989, Hurricane Jerry, an Atlantic hurricane at the time, was racing toward the United States. The southern U.S would endure millions in property damage and some lives were lost as the result of the hurricane. The hurricane has much uncertainty with the path it would take. The places that the hurricane was eyeing for was between Texas and Florida. Eventually, the hurricane did end up making landfall on Jamaica Beach, Texas, late on October 15, 1989. The hurricane would go on to cause heavy rain and flooding across portions on the eastern half of the United States. By the time had gotten to Arkansas, it was already downgraded to a depression. As the remnants progressed eastwards colder air began to move in as the remnants of Jerry scurried up to New England. By late October 18th, forecasters in the Midwest were beginning to note the chance of some rain mixed with some light snow.

From Warm to Snowy in Just One Week
A few days before the snowstorm, on Friday, October 13th, much of Indiana was enduring 80 degree weather. The beautiful weather continued into the 14th, 15th, and 16th with highs in the upper 70s to low 80s. But on the 17th, temperatures began to fall as the low pressure that had the embedded remnants of Jerry began to approach from the south. By then, the area of low pressure that had been centered in southeast Missouri became cutoff from the main upper level flow in the area. As the low pressure system began to move, the low began to produce cold air aloft from the surface. By the time the system moved into the Ohio Valley and Great Lakes, moisture from the Gulf of Mexico was able to override the cold air aloft. With all these factors in place, snow began to form.

The Surprise Snowstorm of 1989
Late on October 18th, the air had become cold to the point where snow was likely to began falling. Just before midnight, snow began falling by midnight, portions of Indiana began to pick up some snow on the ground. This would then be preceded by up to 10 more inches of snow on the 19th as the snow continued to fall. Many woke up to street lines covered in snow and some downed power lines. Many trees that had been covered in snow hadn’t lost much of their leaves yet. Furthermore, the impact of the snow on the leaves led to branches weighing in on power lines leading to widespread power outages across much of the Ohio Valley and the Great Lakes region. Temperatures during the day on October 19th remained around the freezing mark, thus allowing the snow to continue. The day ended up setting the record for not only the snowfall amounts which were above 9 inches in some places, but it also set the record lowest high temperature. The city of Indianapolis picked up to 9.3 inches of snowfall. The temperature on that day was only a high of 35 degrees in that city too on that day. The snow continued to fall into October 20th, however by then the low pressure system was moving upwards to New England leading to just some snow showers falling in the area. Luckily, once the snow stopped on October 20, temperatures quickly recovered during the weekend leading to snow melting pretty quickly.

Result of the Surprise Snowstorm
Those that woke up to snow on the morning of October 19th we pretty shocked by what they saw. Many businesses that usually opened up early, remained closed during the day of the snowstorm and schools were cancelled leading to kids having their very own snow day really early that year. The snowstorm also led to a lot of frustration, especially among policer officers, officials, and drivers that had to deal with downed power lines for at least 13 hours. Tree services were flooded with calls about downed power lines on the 19th.

Conclusion
Although it has been at least 30 years since the surprise 1989 October Snowstorm, it is still remembered as a reminder that anything can happen in the month of October. It is recorded that snow had fallen in 38 Octobers dating back to when records started. The most recent snowfall was last year on Halloween when snowfall fell in parts of the Great Lakes. Chicago ended up seeing just significant snowfall amounts of up to 3.4 inches of snowfall. Even at Ball State, we even picked up some significant snowfall amounts on that same day as well.