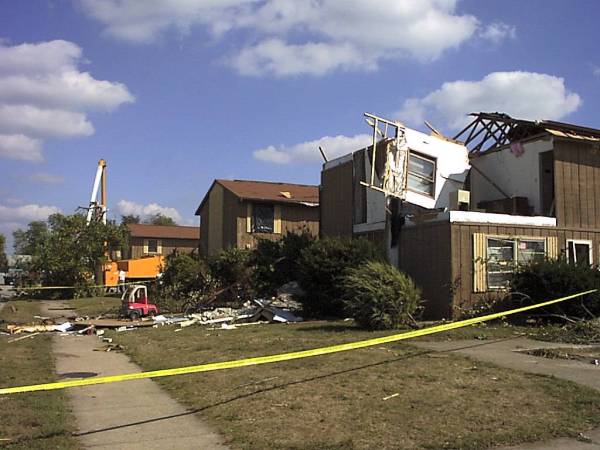 Fall season is usually depicted as mainly calm and full of cooler days and cold nights. The weather is usually nice and very comfortable to enjoy. But there are times when the weather can turn volatile, like the event that took place on September 20, 2002. In September, it is pretty unusual to see severe weather since most of the action can happen in October and November with cold fronts moving in and bring much cooler air. However, in that September things would take a different approach.

Earlier in the day on Friday, September 20, 2002, it had been initially planned that there was going to be a cold front passing through and along with it bring a line of showers and storms that would pass through Indiana. However, there was another factor that would likely influence some instability with the line of storms.

The factor that would result to the uptick in tornadic activity was an upper level system along with the cold front that fueled the storms. Throughout the morning it remained quiet until a tornado touched down near Evansville in Posey County, Indiana. It quickly fell apart and shortly after, within thirty more minutes of the first tornado, another tornado touched down in Pike County and traveled northeast for a little bit before dissipating over Davies County. Both tornadoes that touched down were rated EF2’s. However the bigger story would come with the next tornado that would form soon after.

At around 12:59 p.m. on September 20, a tornado touched down near Bloomington in Monroe County, Indiana and began to track north. As the tornado tracked north, it began to get stronger. The tornado initially became a EF3 in the same country before weakening a little but the tornado kept going. By the time it reached Marion County, right around Indianapolis, the tornado was back to being an EF3 tornado once again. The tornado continued to track all the way up to Muncie, IN(where Ball State University is located) and finally dissipated in Blackford County, Indiana at around 3:10pm.

Once the final tornado lifted, there was now a trail of destruction ranging from southern Indiana, to central Indiana, all the way up to northeast Indiana around Muncie. Luckily, with the outbreak, there was no fatalities but there were 130 injuries and 45 schools were affected. The tornado event also caused up to $156 million dollars in damages across Indiana.

There were many interesting facts that can be taken away from how things played out on September 20, 2002. The final tornado that formed in Monroe Country (near Bloomington) and continued all the way to Blackford Country (just a little bit northeast of Muncie) was noted as the 2nd longest lasting tornado to move through the state of Indiana since the tornado that struck Indiana on April 3, 1974. Another shocking event that occurred with the tornado was that the winds were estimated to be up to 160 miles per hour when the tornado was at its peak as an EF3. Finally, another shocking thing about the tornado was that there were no fatalities with the tornado considering on how badly homes and businesses were damaged.