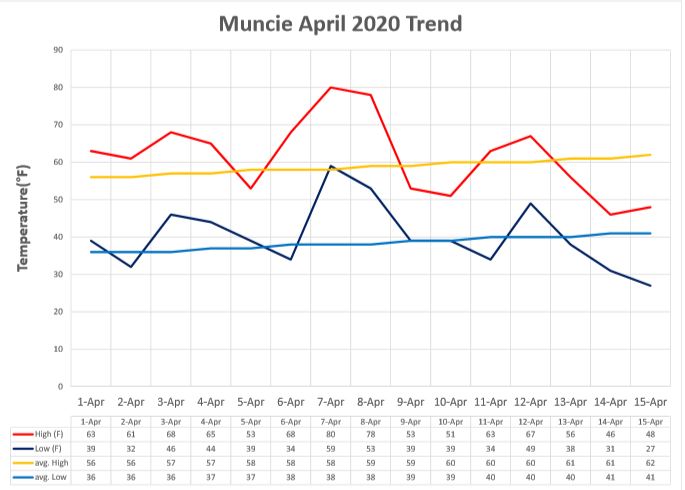 It’s safe to say that the weather the middle part of April has been anything but normal. With highs touching 80°F on April 7th, then on the morning of April 15th lows dropping to 27°F with widespread frost on multiple mornings this week. Normally in mid-April we should see highs in the mow to mid 60’s and lows in the low to mid 40’s. Today’s forecast high on the 16th of April is only supposed to be 46°F that’s just 4°F above the NORMAL LOW for April 16th! The featured image, a little homemade temperature trend chart, shows just how crazy the weather has been. Believe it or not we’ve have some days this month were the weather has been close or very close to average. Those days has just been outweighed by the much warmer or much warmer conditions. So I know some of you are asking your local meteorologist, when is it going to feel like normal?

Well in fact! It maybe normal starting next week! Looking at forecasts for the start of next week and looking at trends from the Climate Prediction Center, we will actually start to have some normal weather as the atmosphere will modify between summer-like and winter-like weather. We should see highs in the 60’s and lows in the 40’s instead of the craziness we have been seeing the the weeks past.