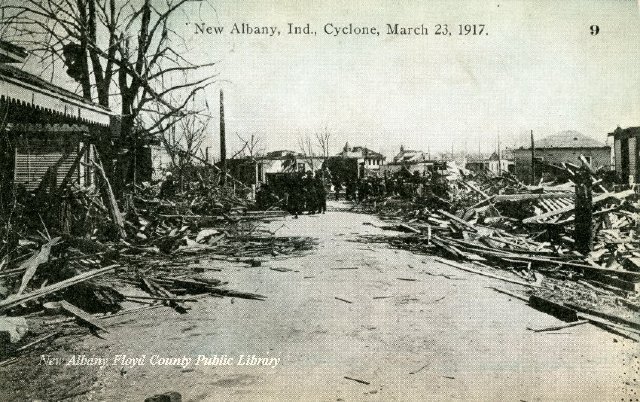 Spring is finally here, (although it doesn’t quite feel like it), and with it comes severe weather season here in Indiana! We haven’t seen much in the way of severe weather yet, but it was a lot different on this day in 1913 and 1917!

It was March 23, 1913. It was also Easter Sunday. A potent weather system was moving across the U.S., triggering two seperate tornado outbreaks, the first of which had started two days prior in Mississippi, with several F2 tornadoes and one F4 tornado. The second outbreak, on March 23rd, produces much stronger tornadoes, with 6 F4 tornadoes, 2 F3 tornadoes, and 2 F2 tornadoes. The final tornado of the outbreak, an F4, struck west/southwest Indiana, in southern Terre Haute. 300 homes were either damaged or destroyed; an entire 5-block area was leveled; and 21 people were killed. Flooding after the tornado claimed 12 more lives.

Just 4 years later, on March 23, 1917, southern Indiana was struck again. This time, an even stronger F4 tore through parts of Harrison, Clark, and Floyd counties, and a portion of Jefferson county in nearby Kentucky. The tornado formed west of New Albany and moved east, across central Harrison county. It passed just one mile north of Corydon, cutting a nearly mile-wide path of destruction and devastation. On the northside of New Albany, 300 schools, 2 schools, and many other buildings were destroyed. 46 people were killed before the tornado crossed the Ohio River and lifted over a neighborhood in Louisville. The tornado would go on to be one of the worst in the Kentuckiana region’s history.