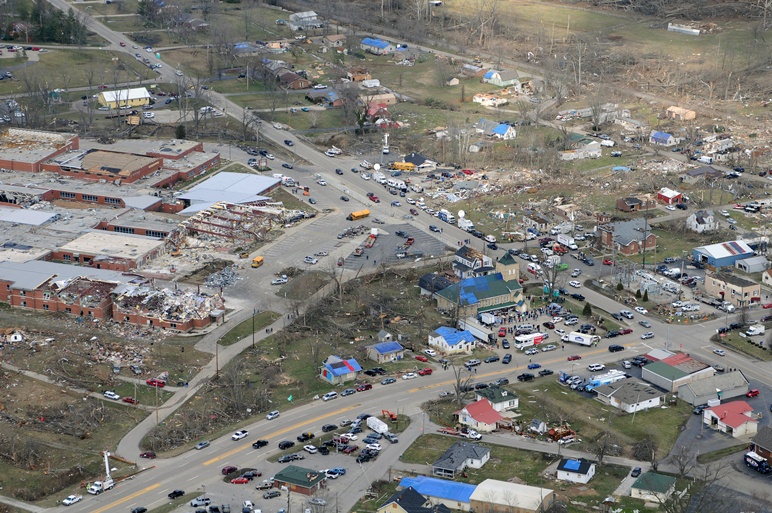 One week from today, March 2, will mark 8 years since the devastating Henryville, IN tornado. The nearly half-mile wide, EF-4 tornado, was the deadliest of an outbreak of tornadoes from March 2, 2012-March 3, 2012. The violent stovepipe tornado was on the ground for 49 miles, destroyed hundreds of homes, and killed 11 people. The towns of New Pekin, Marysville, Chelsea, and Henryville sustained severe damage, with initial reports of Marysville being completely wiped out.

The Storm Prediction Center (SPC), issued a moderate risk, for a large swath, from Tuscaloosa, AL to Dayton, OH, on March 1st, one day before the tornado hit.

This was updated to a High Risk the morning of March 2nd. In addition, a PDS (Particularly Dangerous Situation) Tornado Watch was issued shortly before 11 a.m EST. This was expanded into southern Indiana/Henryville, at 1:05 P.M. The text of the watch (shown below), indicated that there was a high risk for not only tornadoes, but strong (EF-2+) tornadoes.

Just under two hours after the watch was expanded/issued, the Henryville tornado touched town.

It was 2:50 P.M, near southern Fredricksburg, IN. Supercells were developing as a cold front approached. An EF-1 tornado had touched down, and was moving northeast. The tornado intensified to a high-end EF-2 tornado and continued intensifying. It passed just north of Palmyra, ripping slabs of asphalt from roads and snapping trees and power-poles. It strengthen from EF-2 to EF-3, and it grew wider and wider. Then, as it approached the south side of New Pekin, it reached EF-4 strength. It leveled homes and bushiness, obliterated mobile homes, destroyed farming structures, and left the town destroyed. It then crossed into Clark County, and approached Henryville.

It briefly weakened to EF-2, before restrengthening to EF-4 as it crossed I-65 and into Henryville. Homes and building were destroyed, as winds reached 175 mph. It was in this area that there was evidence of a multi-vortex tornado. The tornado then hit the Henryville Middle/High School complex, where students had, fortunately, been dismissed early and sent home on buses as the storm approached. A group of remaining staff and students sought shelter in an office, and miraculously all survived. A school bus driver likely saved the students on her bus by bringing them back to the school and evacuating the bus as the tornado bore down on the area. The cafeteria was completely destroyed, and two buses were ripped of their chassis.

The storm weakened, but continued to do significant damage, as it passed through the town. It rapidly narrowed, weakened, and ended as an EF-1 tornado. Much of Henryville was badly damaged or completely destroyed. First responders, emergency management, FEMA, Red Cross, and other organizations aided in search and rescue and recovery efforts, and thousands of volunteers helped with clean-up and rebuilding efforts.