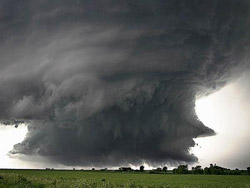 The past couple weeks, we’ve been on a wild weather ride. We’ve gone from temperatures near, if not in, the 90’s, to temperatures in the 60-70 degree range, back into the 80’s and then plummeting into the mid-40’s to low-50’s. These temperature swings often bring windy conditions, due to a sharp gradient over a short distance. However, sometimes, these sharp gradients can and have, brought spring-like severe weather, in the fall. In fact, we have a secondary severe weather season in the fall!

During fall, we are transitioning from the warmer, more moist summer air, to colder, drier, more winter-like air. The temperatures are still fairly mild at this point, and as we’ve seen the past few weeks, we can still have the occasional heat wave. Then, we get southern dips in the jet-stream, which bring cooler air in from the north. This results in the large temperature gradients over a relatively small distance. Sometimes, if the right ingredients are there, this gradient, or cold front, acts as a trigger for severe weather.

One example of this secondary severe weather season happened fairly recently, on November 2017, when a strong cold front moved through the state. This system produced a long-tracked EF-2 tornado northeast of Eaton. This tornado impacted parts of Delaware, Blackford, and Jay counties as well as in Mercer County, Ohio. This produced mainly tree damage in Delaware County, and more significant damage further along the path. An EF-1 tornado was briefly spun-up in Muncie as well, resulting in roof damage to several buildings and uprooted and damaged trees. Just a couple weeks later, on November 18, another round of severe impacted parts of western Indiana, where an EF-0 tornado touched down near Dayton, causing damage to a house and several trees. A microburst near Frankfort also resulted in damage to multiple buildings, including a high school and a church, as well as downed trees.

So, remember, just because the weather is getting cooler, doesn’t mean the severe weather threat is over!