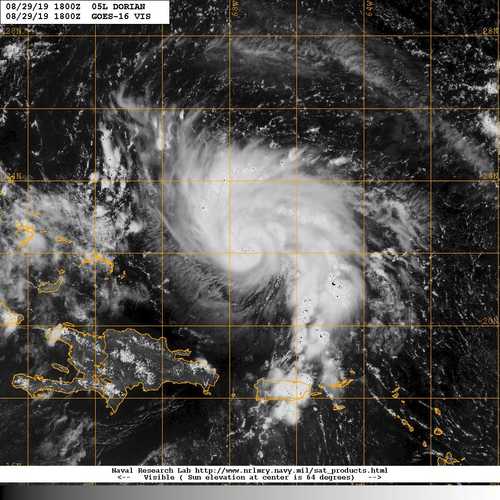 At around 2 pm EDT on August 28, the National Hurricane Center released a statement with important implications: Tropical Storm Dorian, a swirling mass of storms in the Atlantic, had reached hurricane status. 24 hours later, as of August 29, Hurricane Dorian has winds of 85 mph swirling around its center, with forecast models suggesting that it will be near the Central Florida coast by Labor Day. This does raise some questions though: What is Hurricane Dorian? How was she born? And what can we do about it?

This is because hurricanes depend on several major conditions, including…

The reason that all these conditions are needed is that hurricanes are heat engines. They derive energy from water vapor. As the warm water evaporates, it rises and cools, forming clouds. Low pressure at the surface results in air rushing in, pulling more vapor and moisture into the storm and forming more clouds. This lowering of air pressure also increases wind speeds. If conditions are right, the wind can reach beyond 74 mph, of which we call a hurricane.

In Hurricane Dorian’s case, forecast models suggest that she will intensify into a major hurricane, with wind speeds beyond 111 mph. This is mainly due to its path through warm Atlantic waters. The hurricane’s direction, indicated by the black arrow, passes through waters with ocean temperatures around 29*C, or 84*F, as indicated by the map below. This means lots of fuel for Dorian.

When (or if) Dorian reaches the coast, just like any other hurricane, she will come with an assortment of threats. Generally, most hurricanes cause destruction through the storm surge. When a low-pressure system, like a hurricane, approaches shore, its winds push ahead a bulge of water, which begins to pile onto shore. The surge can cause heavy inland flooding. Even if storm surge doesn’t become the biggest problem, hurricanes can also bring high winds and produce heavy rainfalls, which might mean lots of inland flooding and more damage. With Dorian expected to make landfall in the east coast of Central Florida as a major hurricane, this will mean lots of damage potential for those in its path.

Since Dorian is expected to hit Florida around Labor Day weekend, this will cause problems for those heading to the south at this time. For those who are in Florida, staying safe is of utmost importance. Before the storm arrives, make sure to be listening for updates on what the storm is doing and where it’s going, from NOAA or from weather forecasters. Make sure to have food supplies and medical kits stockpiled, and make sure you have sufficient power on phones and radios for updates. Make sure to have ways to contact relatives to tell them that you’re okay. If told to evacuated a low-lying area, do so to avoid storm problems. If doing so, make sure to know the best evacuation routes, in order to get out safely. If not told to evacuate, hunker down, make sure to tie down loose objects and cover window to mitigate damage. After the storm, make sure to be careful when cleaning up, and make sure to follow instructions from authorities. For more information on hurricane preparation, check out https://www.ready.gov/hurricanes.